Remember the Bitfinex hack from 2016? The cryptocurrency crime case from February 2022 is the sequel to the Bitfinex security breaches 2016. The US Justice Department issued a statement on Tuesday morning that more than $3.6 billion in stolen bitcoin, linked to the 2016 hack of Bitfinex, was seized. This represents the agency’s largest financial takeover ever, as reported by Deputy Attorney General Lisa Monaco.

What was the federal court’s accusation?

The pair was accused of attempting to launder the profits of 119,754 bitcoin stolen from Bitfinex’s platform. During the security breach of the exchange in 2016, hackers initiated more than 2,000 unauthorized transactions. Prosecutors suspect that the transactions connected the stolen bitcoins to Lichtenstein’s digital wallet.

Officials stated that they could capture more than 94,000 bitcoin, valued at around $3.6 billion at the takeover time. According to the agency, the total stolen bitcoin is valued at approximately $4.5 billion.

“Federal law enforcement demonstrates that they can follow the money through the blockchain and that they will not allow cryptocurrency to be a haven for money laundering or lawlessness within the financial system,” Assistant Attorney General Kenneth Polite Jr. stated in a press release.

The pair were charged with conspiracy to commit money laundering. This crime brings a maximum sentence of 20 years in prison and conspiracy to defraud the United States, which brings five years imprisonment.

Number (and type) of scams on the increase

Crypto platforms faced several hacks in recent months. According to data from blockchain analytics firms, scammers took home a record $14 billion in cryptocurrency in 2021. Wormhole, one of the bridges linking the Ethereum and Solana blockchains, lost around $320 million in an evident hacker attack earlier this month.

The Bitfinex security breach and the laundered funds 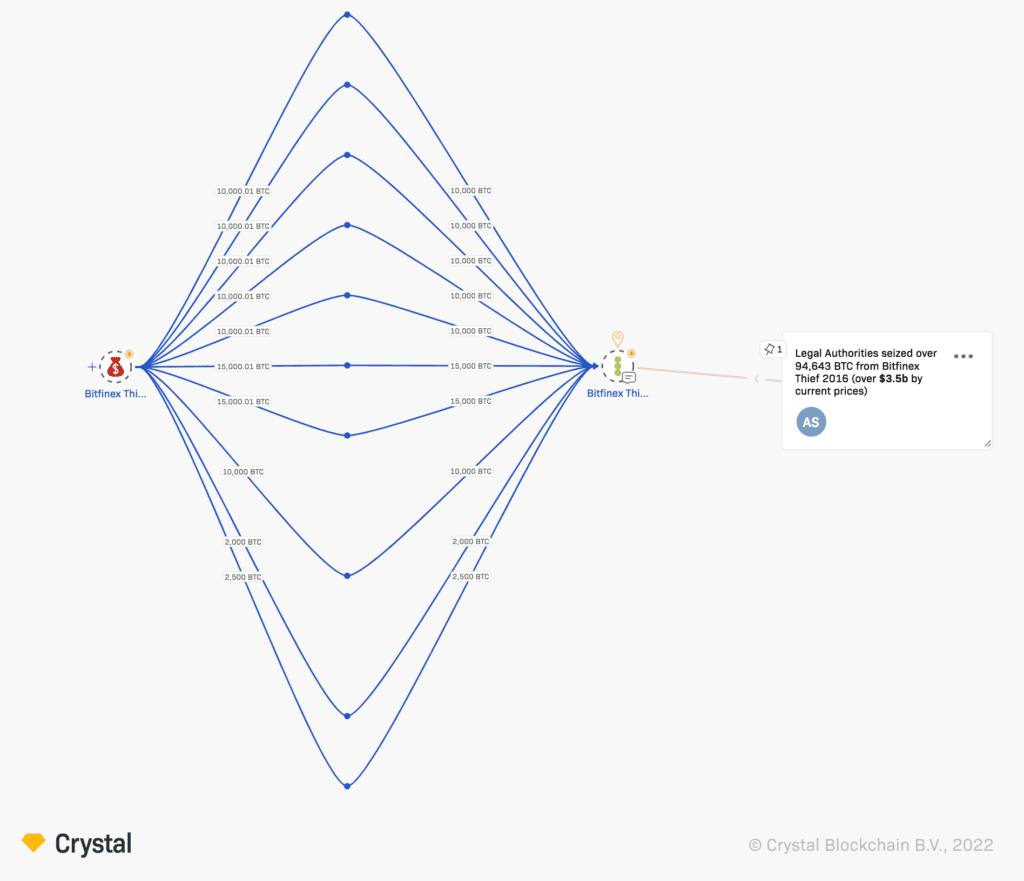 The breach in 2016 was among the hackings into currency exchanges that allowed for the heist of large amounts of digital currency. The thefts underlined the security exposures in the relatively new cryptocurrency world, even with the recovered stolen funds. In many cases, security breaches brought a drastic drop in cryptocurrency value.

After the hack of Bitfinex, one of the largest exchanges in the history of the cryptocurrency market, the value of bitcoin dropped about 20%. “In a futile effort to maintain digital anonymity, the defendants laundered stolen funds through a labyrinth of cryptocurrency transactions.” as stated by Lisa O. Monaco, the deputy attorney general.

Mr. Lichtenstein, who goes by the nickname of “Dutch,” has both American and Russian citizenship and describes himself as a technopreneur. On her LinkedIn page, Ms. Morgan writes about herself as “a serial entrepreneur” and an “irreverent comedic rapper.” The complaint, which also accuses a couple of conspiracy of defrauding the United States, suggests that Ms. Morgan goes by the alias, Razzlekhan.

About 25,000 of Bitfinex’s stolen bitcoin was moved out of Mr. Lichtenstein’s wallet using a complex series of transactions meant to cover the trace.

How the case was solved via blockchain tracing

The movement of the stolen bitcoin on the blockchain was traced when the fixed electronic ledger has been traced. This permanent electronic ledger documents bitcoin transfers to any digital wallet, thanks to investigators who noticed the activity. According to the prosecution, they used the stolen money to buy gold, nonfungible tokens, and a Walmart gift card.

As noted by Crystal’s Head of Investigations, Scott Pounder: “It’s important to remember that the result of this seizure was a culmination of various investigative techniques and not solely solved using blockchain analytics. However, using analytical tools such as Crystal makes it easy to investigate transactions and visualize the movement of assets.”

Legal documents presented by investigators mention that they opted to show straightforward visualizations and show the funds flow. Still, they stated the exact visualization charts would be extensive and complicated to understand.

Crystal can provide a fully automated investigation process by its Tracking tool. The Tracking tool enables determining the present location of bitcoins from a selected transaction or set of transactions. Tracking can reveal whether the bitcoins from the original transaction have reached a known entity, such as an Exchange or a Payment Processor, which in turn could permit the identification of a bitcoin owner (usually via an additional legal process). In any case, the analysis results are easily exported and presented in a convenient and auditable form.

“Ultimately investigators were able to obtain a document from the cloud storage which gave them everything they needed such as private keys etc. They were able to link email addresses to exchanges, KYC, and also personal accounts such as PlayStation and Walmart.  It’s too early to say how deep they went but as the trial progresses this should become evident”, Scott added.

The whole case employed three blockchain analytics companies, which suggests the case needed constant attention. Overall it’s a great case example that we at Crystal will continue to watch.

As the cryptocurrency industry evolves with technology, new threats arise, and we at Crystal Blockchain don’t rest on our laurels either when it comes to making the cryptocurrency space safer for all of its participants. We’ll be happy to offer our expertise and professional investigation consultation – make sure you contact us at: [email protected]

Similar news...
Biggest Feds Crypto Seizure Ever: What Happened?
Read about the Bitfinex hack and money laundering case… as it has unfolded six years later